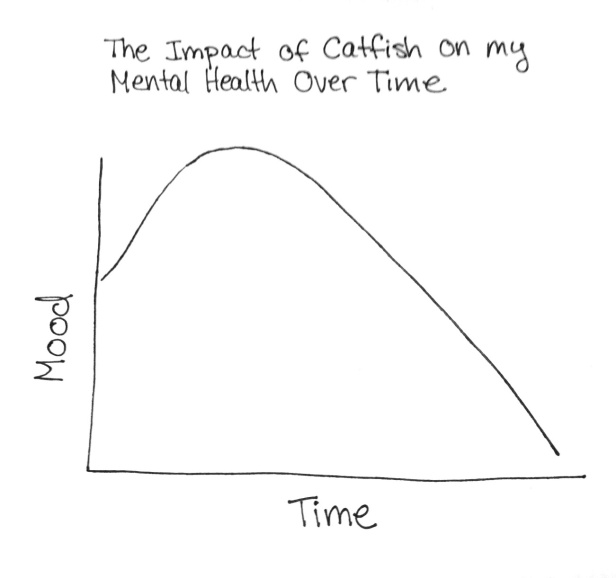 Guys. I have the flu and two ear infections, which means I can’t bring myself to do anything except cry and watch Catfish. I watched ten episodes yesterday. Below I have chronicled the evolution of my thoughts throughout my viewing marathon.

Ughhhh. What a waste of a day.

I forgot how much I like this show! This drama is off the hook!

This marathon actually makes being sick totally worth it! I can’t believe I ever thought there could be a better way to spend a Sunday! Also… I can’t help but feel like Nev is the closest friend I’ve ever known?

Okay, all of these backstories about bullying and repressed sexual orientation are getting to be kind of a downer.  But it’s really sweet that that small town country hick isn’t totally judging his catfisher for being transgendered, even though he had to ask Nev if that meant she was born with both sets of genitalia. God, Nev is hot when he explains sexuality to adults.

Wow, these people are all idiots. How can this obese mother of three really believe she’s in a relationship with an Abercrombie model with abs as hard as granite countertops? I’m sorry, but the number one rule of life is that no one will ever hook up with anybody who is less hot than they are, and if you haven’t learned that by the time you’re eleven then you’re helplessly unobservant. It’s the same reason I know Nev and I will never be together, which sucks, but I’ve accepted it because I live in reality. It’s fine. Whatever.

Oh my God. Why… what… how are these two teenagers raising someone else’s newborn baby in a motel room by themselves? WHY ISN’T THE DEPARTMENT OF HUMAN SERVICES INVOLVED? I’M A MANDATED REPORTER DO I NEED TO REPORT THIS?!

I see now that a huge swath of the world’s population is trapped in an endless cycle of poverty and/or mental illness, completely incapable of making rational, healthy choices. And it’s never going to end because they keep bringing more children in to the same situation—children who are left to raise themselves in motel rooms while their parents are off having online affairs with closeted teenagers. America is so fucked.

I understand now. People are willing to believe in any far-fetched fantasy that will distract them from the hopelessness of reality.

Oh my God. Life is so hard and so sad, and we’re all just doing the best we can—and that’s the saddest part of all.

(Fun fact: I shared that last observation with Doug while openly weeping over a bowl of chicken ceaser salad at Applebee’s.)

The moral of this story? Watching Catfish is a lot like sitting in a hot tub. At first it feels wonderful, but you need to know your limit. Staying in too long will leave you pruney, depleted, and emotionally ill-equipped to carry on with life.