Guys. This Kindle is dangerous. I’ve fallen in too deep. I’m afraid I’ve officially taken the revelation that “Now I can read anything no matter how embarrassing the cover!” a bit too far. Each of the last two books I’ve read have been about a middle school girl trying to follow a list of advice to make herself more popular. Now in my defense, one of these books just came out as the prequel to a young adult series that I read all throughout my adolescence, so I think that’s semi-excusable. The other one, well, I don’t want to talk about it. Anyway, ask me anything about middle school popularity. (Freebie advice: Stick with the IT clique and make the cheer team.)

It’s a slippery slope, I’m telling you. At this rate, I’ll soon be reading “Chicka Chicka Boom Boom” and “Everybody Poops.” Sounding out words and relying on context clues and all that, regressing into a literary infant. That actually sounds really nice and safe. I just got warm and fuzzy feelings all over at the thought of re-babying. What is this?!

Doug and I drove to St. Louis Friday night. Halfway through we stopped at Wendy’s for some of those super fresh lettuce leafs they’ve been advertising all over their walls. 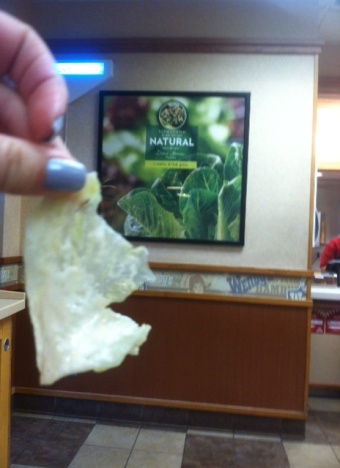 We also stopped at a Casey’s gas station, which, can I say? I’ve been in a lot of gas stations in my day, and this one was, like, really nice. It was super spacious and clean and immediately made me fantasize that I was in India fantasizing about being in this Casey’s. (Things in my head got really meta really fast, which is always the sign of a good gas station in my book.) Also I started fantasizing about secretly moving in there and having a baby a la Where The Heart Is. Also it had sprinklers running in the patch of grass right next to it that I kind of really wanted to run through but just as I was about to jump in, Doug emerged from the bathroom, asked me what I was doing, and suggested we just keep driving.

We stayed at my parents’ house, though they were out of town (they are already back now though, so if you were thinking of robbing them forget about it), which meant that the house was just one big expanse of Twizzlers and fifty dollar bills and reassuring Post-It notes. 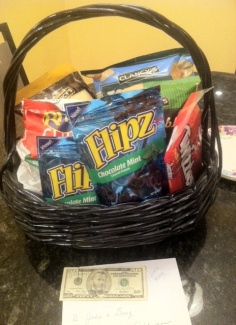 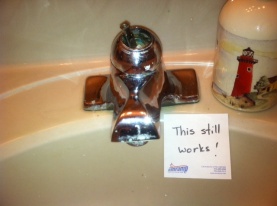 (Doug pocketed the $50 to reimburse himself for the Glee songs that I downloaded from his Amazon account and made him burn onto a CD for the roadtrip, though if you ask me I should get at least some of that back since he messed up. I told him to include only the fast version of “Loser Like Me,” but he misread my text and thought I said just the first version, which I had downloaded by mistake because who the hell likes the slow version of “Loser Like Me?” It completely changes the tone from an empowering fuck you song for winners to the pathetic backdrop of a pity party held by actual losers. Anyway, am I a middle school girl? Lines are blurring here.)

On Saturday we spent the day with my BFF Bevin and her boyfriend and parents and brother and sister and sister-in-law and niece. We went to the St. Louis Art Museum which I hadn’t been to in years, but as it turns out, still smells exactly like my childhood. Museums make me sleepy.

That night we went to the City Museum where I finally got to ride on that ferris wheel on the roof and sit in the school bus teetering off the edge of the building. I feel like I don’t even want to bother writing about how awesome the City Museum is, because it’s too hard to explain to people who haven’t been there. It’s basically a playground for adults, though I realize that describing anything as “for adults” automatically conjures images of porn, so I’m sorry for that. Anyway, here’s a fun fact about being 27: slides don’t work anymore. This is the first time I’ve been and haven’t been able to slide down the slides so much as kick myself down the whole way. Which is a long-ass way, at the City Museum.

This morning Doug and I woke up, tried unsuccessfully to coax my childhood cat to come out from under the rocking chair for about 1.5 hours, and then went back to bed.

Then we drove back to Iowa. Rather quickly, according to our 83mph in a 65mph speeding ticket.