Earlier this summer, Doug and I were under the impression that we were outdoorsy enough to camp.

We spent the summer amassing supplies and then set off for our weeklong camping trip to Michigan/Wisconsin. We arrived to our first destination to discover that our campground was actually a parking lot, completely devoid of nature or privacy.

Our second campground seemed more promising… at first. As we drove in, we were relieved to see that each campsite was its own beautiful forested enclave. Until we reached our own site, #11, which turned out to be just the tiny hill connecting the bathroom to the road.

As we got out to inspect, a man drove by in a truck, read the looks of confusion on our faces, and called out, “Welcome to the campsite that used to be twice as big before they added that there bathroom!”

I walked over to the campground manager’s office, knocked on the door, and asked if we could switch to another site.

“Is something wrong with your site, ma’am?”

“Well, it’s not really a campsite so much as the hill connecting the bathroom to the road.”

“Oh!” he said, his face suddenly lighting up in recognition. “You must have site #11! That one’s the worst!”

“I know,” I said. “I saw it. You really shouldn’t put the best and the worst right next to each other.”

Doug and I toughed it out those first few nights, eating chicken from a can and fighting and pretending to enjoy being “liberated” from the constraints of modern architecture.

On the fourth day, it started to rain ever so slightly and Doug emerged from the tent and declared, “I’m booking a hotel! I refuse to spend one more second in this wet garbage bag!”

(Apparently you’re supposed to, like, bring an extra rain tarp for your tent? Everybody seemed to know this but us).

“Oh it’s not that bad,” I said, seizing on this opportunity to make it appear like I was the more rough and tough outdoorsy one and he was the quitter (even though, technically speaking, I was completely miserable and my skin felt like it was turning into mold). “We can handle a little rain. It’s lovely and refreshing. It’s God weeping with joy at the beauty of his creation.”

But as Doug started calling around to hotels, I found myself whispering “Ask if they have cable. How big is their pool?”

He ended up booking an AmericInn less than a mile from our campground which would be much more scenic/closer to the lake.

We had several hours to kill before we could check in, so we went on a rain hike through Porcupine Mountain State Park, climbing up Summit Peak to a beautiful overlook. The trees were covered in a beautiful mist like I had never seen before. The world looked soft and sparkly. And at what I would later learn was the exact moment the news leaked about Robin Williams’ suicide, Doug pulled out his Grandma’s ring and proposed. 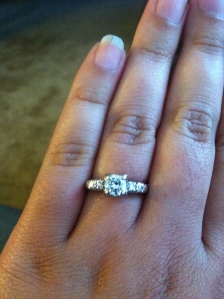 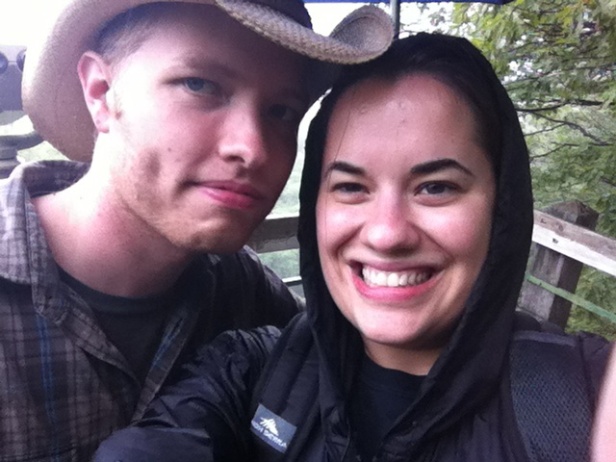 Shortly after, we gleefully realized that our hotel check-in time was almost upon us.

“Let’s go get our tent,” Doug said. “And then we will wash our hands of this camping business just as Pontius Pilate washed his hands of the equally dreadful business of the slaying of Christ.”

These words made me the happiest girl in the whole world.

We spent the next half hour bitterly cramming our drenched, malodorous tent and other camping supplies into our car.

But by the time we got to our hotel, dried off, processed the gruesome details of Robin Williams’ death, ate a hotel dinner, watched some hotel cable and slipped into the hotel hot tub, we were in the best moods of our lives.

“Whoever invented hotels was a total genius!” I exclaimed.

“Hotels are the one thing in life that never let you down,” Doug said. “They are always there when you need them.”

“It’s like a house, except it is way better than your own house, and you get to just stay there and pretend you live there!”

“They shelter you from every natural and emotional storm of life.”

“They are always clean, and when you make them dirty, they are magically clean again the next day.”

“I’m not ever leaving here,” Doug said. “You can’t make me. This AmericInn is literally the only home I have ever known. I don’t have time right now to verify that by crunching the numbers or pouring through the records, but it feels right.”

We were laughing maniacally by the time we left the hot tub and headed out to watch the most beautiful sunset of our lives on the AmericInn’s beach. 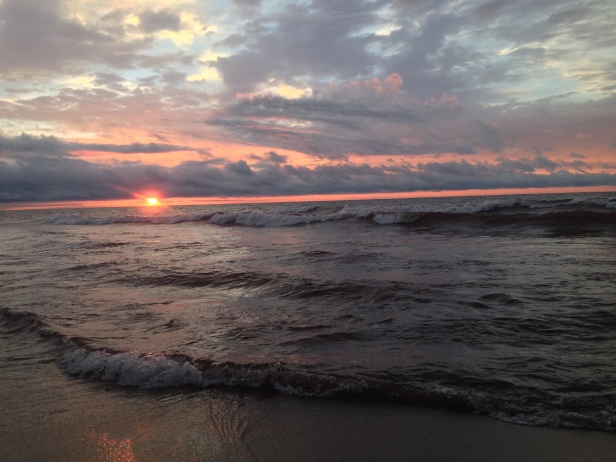 We decided to spend the next few nights in a different lakeside AmericInn a couple hours west.

As we were driving to the new one, I received an email asking us to rate our experience at the AmericInn.

“Ha!” I said to Doug as I read the survey off my phone. “One of the questions is ‘Would you stay in an AmericInn again? Yes or no.’”

“Is there an option for, “We are literally driving to the next nearest AmericInn as we complete this survey?” Doug asked.

Upon walking into the new one, we were greeted by the friendliest employee in the world—a man named Jodi who loved his job more than anybody I have ever met. He offered us a tour.

Guys. Holy sausage balls. Our new AmericInn made our old AmericInn look like a pile of dog carcasses being actively torn apart by ravenous, blood-thirsty vultures with dog guts dripping out of their teeth.

“They literally thought of everything,” I said, stunned, as Doug and I stood out on their pier over the lake.

“They had a board meeting,” Doug said, “They wrote the word ‘everything,’ drew a line under it, and proceeded to make a list of all this stuff.”

“I want to get married here,” I said. “No, scratch that. I want to actually marry this AmericInn. No offense.”

“This AmericInn is the only home I have ever known,” Doug said. “I’m never going to leave. You can’t make me.”

We spent the following days in a state of uninterrupted bliss and giddiness. It’s hard to say how much of it was the engagement and how much was the AmericInn, but I like to think it was the perfect balance of both.

With any luck, Doug and I will spend the rest of our lives together, traveling around the country to promote the AmericInn franchise- Doug through catchy jingles and me through heartfelt blog posts- waiting for AmericInn to contact us about becoming the official spokespeople and rewarding us richly with discounted stays and maybe, just maybe, an all-inclusive honeymoon.

Now go celebrate our engagement by staying at the AmericInn in Silver City, MI or the one in Ashland, WI! Both lakeside, both gorgeous.

16 thoughts on “Doug and I Commit To Stay Together Forever and Simultaneously Declare our Everlasting Love for the AmericInn Motel Chain. Or: I’m Engaged! And really, really in love with hotels.”