Last week I overheard someone whisper to somebody else that I seem like a goody-two-shoes. I get that all the time.

It’s amazing how often people who barely know me feel compelled to say things like, “I bet your idea of a wild night is having one glass of wine and playing Scrabble,” or “You look like someone who is always in bed by nine.”

The implication is always the same: I seem tame, predictable, and boring.

And they could not be more wrong! I mean, okay, it’s true that I enjoy throwing down a mean game of Scrabble. But I don’t even like wine! I much prefer apple juice. And the hours after nine o’clock are my prime time for posting pictures of my cats to Facebook, reading young adult novels, and watching the Glee music video for “My Life Would Suck Without You” on repeat.

There are two reasons why these types of assumptions have always surprised me.

The first is that, while I understand it is in our nature to categorize people, I would have hoped this blatant stereotyping would have ended after high school. But if anything, I feel like people are more eager to categorize me now than they were in my adolescent years.

Secondly, I still don’t fully understand how my appearance sends the universal message that I’m a big ol’ prude. Do I just look healthy and hygienic in a way that suggests I have made good life choices? I feel like I look like any other professional 28-year-old woman, and when I’ve tried to brainstorm ways to make my look say something besides “In Bed Before Your Grandma,” I can’t even think of any age-appropriate ways to achieve this. Should I bleach my hair blonde? Should I start wearing those short shorts with the pockets hanging down my upper thighs? Should I take up chain-smoking and pierce my eyeballs?

Several weeks ago when a co-worker casually remarked that I’d probably never been awake past midnight, I finally lost it. “I haven’t been in bed before midnight since I was eight years old, damnit! Why do you assume that about me? What is it about me that says that?” I demanded.

“You’re just such a girl next door,” he said.

“No I’m not! For all you know I’m a girl…uh… all the way at the other end of the street! Or in an entirely different neighborhood!”

Then I went back to my office and sulked. I decided I needed to figure out my true identity once and for all so I could set the record straight.

So I did what any 28-year-old woman with a solid sense of self would do: I conjured up the cafeteria scene from Mean Girls and tried to place myself. I was never confident enough to be a prep or a slut. I never had enough baggage to be goth or emo. I wasn’t quite awkward enough to be a nerd. It was far too late to be a jock. None of those categories had ever appealed to me. So what was left?

I was just a kind, approachable, happy normal person who liked to watch TLC and shop at Bath & Body Works and spend time with family, friends, and cuddly kitty cats.

“Oh!” I thought, the realization suddenly striking me like a bag of Scrabble tiles to the face. “I am the girl next door.” 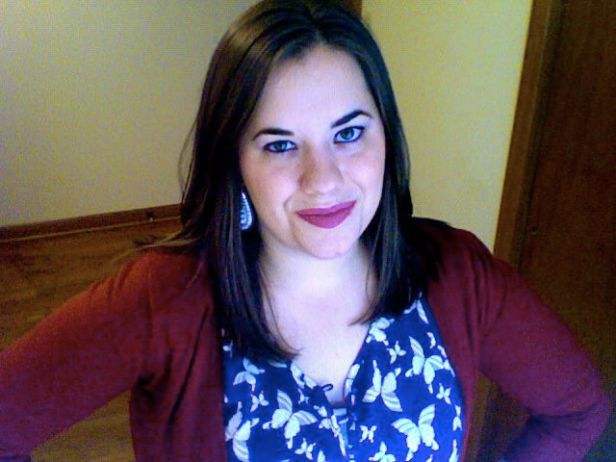 So why was I being so defensive about it? Consciously or subconsciously, at some point in my life I chose this image for myself over all the other possibilities. Why should I be embarrassed about that? It had been a good choice for me. Still is.

My good girl image has actually served me exceedingly well over the years. The look comes with its own distinct set of advantages. I am well-received at job interviews, I am unanimously approved of by boyfriends’ parents, and nobody ever bothered to search me during the three-year period where my body randomly set off every store alarm for no reason. (Nor should they have, as the thought of stealing would never even cross my mind. Because, let’s face it: good girl.)

Of course, like all labels, it’s overly-simplistic and fails to tell the whole story of who I am. I also have a penchant for thinking up puns so vulgar they would shock Three 6 Mafia, and a tendency to put my phone down my shirt, breathe heavily, spread my legs and pretend I’m birthing it.

That’s the good girl’s secret weapon, after all: the element of surprise. And that has also served me well.

As a teenager, I worked at a restaurant where all the employees were on drugs. I barely spoke to anyone there for two years, until a rumor started spreading that I was dating a server named Jack. Jack was nerdy and religious. He had big glasses and a dorky haircut and was the only other person who could have passed a drug test. I had never talked to him, but suddenly everyone was gossiping about us being a couple. They had lumped us together for being wholesome.

“How’s it going with you and Jack?” a server teased me one afternoon as I refilled a customer’s Pepsi.

“Oh he’s a real tiger in the bedroom,” I deadpanned. “And I mean that literally. He can only get off if he’s wearing that damn tiger costume. It’s kind of weird but also kind of hot.”

Word quickly spread throughout the restaurant that I was funny and strangely explicit. Over the next several weeks my co-workers approached me one by one to ask about Jack. I gave each one a more lurid description of our made-up sex life than the one before and enjoyed watching each one run giddily back to the rest of the group to recount the twisted things I’d just said.

(Poor Jack. I could never look him in the eyes again.)

There is something powerful about being in a position where you are capable of surprising people. Of being more than what everyone expects.

So for me, I’ve decided, that’s the best way to own my good girl image. I’ll be kind, I’ll be sweet, I’ll be down-to-earth. I’ll laugh good-naturedly when someone suggests I’ve never made it to midnight (I can always cry about it later to my cats as I cue up Glee and pop open a bottle of sparkling grape juice).

And then, once in a while, I’ll surprise them.

I will proudly be the good girl with a twist.