Nobody else in today’s meeting was born in New Jersey.

It’s the only one I missed. Everyone else was born in Iowa.

This post contains my reflections on the three major moves to three different states I have made since I left my parent’s house seven years ago. A few disclaimers before I begin:

2)   I started writing this post several months ago, and it would have been a much different post with a much different tone if I had finished it then. Just goes to show that my feelings on this topic will always be dependent on whichever phase of the moving/re-adjusting cycle I tend to be in at the time.

3)   I am by no means the poster-child for big moves. Many readers of this blog have moved farther and more frequently than I have. I lived in the same house for the first 18 years of my life and since then have never lived more than a six-hour drive from home. Except for a semester in Australia and a summer in India, I have not lived outside the American Midwest (despite being born in New Jersey). Starting over is starting over, but my experiences are relative.

I grew up in what I would later learn is a privileged suburb of St. Louis, though at the time I just assumed it was completely standard. 99% of students from my high school go on to college (according to Wikipedia), and about half of those go out of state. It’s just a given that if your parents can afford it, you’ll end up in another state. No questions asked.

I chose to go to Indiana University through a series of events that is still hazy to me, but probably had something to do with the fact that it was out-of-state while not being too far from home.

Although I never moved in my childhood, I had always assumed that college would be my first of many future moves, because travel and independence and career were so encouraged within my family and community.

But when the time came to actually leave for college, I did not want to go. I am extremely attached to the familiar and nostalgic by nature, so the fact that I ever even left home in the first place is probably 100% a product of the culture in which I was raised. If I was born in another place, to another family, I believe I might have been perfectly content to marry my first boyfriend and never leave home.

But still, I was at least partly excited for college. Because I assumed that everyone at IU would be in the same boat as me—away from their home-state for the first time and eager to make new friends, just as all my old high school friends would be as they scattered to their new schools across the country.

Besides my roommate and me, everyone on my freshman floor were from small, rural towns in Indiana. They were all rooming with their best friend from home. Most were engaged to their high school sweetheart. They went home every weekend to hang out with their families. No one planned to ever leave Indiana.

I felt shocked and strangely betrayed by these girls. I had moved away from my family and friends and broken up with my boyfriend the week before so that I would be fully available to immerse myself in a new social life here, starting with my floormates. Because that’s what I thought you were supposed to do.

While these girls spent their weekends at home, I spent mine on our eerily quiet hallway learning the hard parts of starting over that nobody had warned me about: It’s lonely, it’s boring, it’s sad, and it takes a really long time to know that you’ve made the right choice.

But also, of course, that it does get better. And it did. I adjusted. I made friends. I even met the love of my life.

Four years later I was making plans to move somewhere new for grad school, as had always been my plan, while most of my college friends were making plans to stay and settle in Indiana.

I was in a bar with Doug one night before I left when these lyrics came on:

And here I go again on my own

Going down the only road I’ve ever known

I teared up. “I don’t want to go again on my own!” I cried into Doug’s shoulder.

Later he played Dancing in the Dark by Bruce Springsteen for me, and made me pay attention to this lyric:

So I tried not to worry about my little world falling apart as I packed up and moved to Illinois. (I’d been planning to go to grad school in California forever, but made a last-minute decision to go to Illinois instead. Read into that what you will).

At grad school I mostly met people from Illinois, and started to catch on that everywhere I go I will meet people who have never left. Starting over was slow again, and boring, and lonely. But then I came to love it. My friends there were amazing and I wanted to keep them forever.

Then I blinked and it was over.

I remember sitting in the back of the classroom on the last day as my friends all filled out their applications for Illinois licenses at the table in front of me. It’s happening again, I thought. Everyone I love is staying and I have to leave.

Then I moved to Iowa.

A month after my move, I met a woman at a job training who had moved here with her husband a year ago for his job.

“Do you like it here in Iowa?” I asked her, as I am always eager to pester other people who have also come from other places, probably in search of validation that I am not the only one who feels like a tree without roots.

She stared straight ahead and said, in a tone of grim determination, “We. Are. Going. To. Like. It.”

I found myself admiring and taking note of that attitude, her acceptance that whether she “liked it here” was a moot point by now. She was here. It was done. Bloom where you’re planted, and all of that.

Later I had dinner with a couple friends who also just moved here, one from Massachusetts and one from Scotland. Conversation with them was comforting, as they both understood first-hand the pains and pleasures of starting over—the girl from Scotland much more so than I. But both of them also had plans to move back home eventually. Home—where all their family and friends would be waiting for them.

That type of home doesn’t exist for me anymore. I don’t have a place to move back to someday where everyone I’ve loved in my life will be awaiting my return with open arms. My parents are still in St. Louis, but everyone else from my life is scattered. There is no prospect of moving back home for me, just of visiting old homes and creating new ones. The journey itself must become my home.

I was at my first staff meeting in January, feeling new and out-of-place and wishing that I could just skip right over this inevitable stage of not knowing anyone or anything. And wishing that I did just have a familiar home to go back to once this whole stage was said and done.

But then we played Two truths and a lie, that game where you say two things that are true about yourself and one that’s false and everyone has to vote on which is the lie.

The facts that the girl across from me gave were this: “I have never left the country.” “I have never lived outside of Iowa City…”(I was really hoping her last one wouldn’t be I have never been off of this street) “…And I have never gotten a speeding ticket.”

The lie turned out to be that she never lived outside Iowa City, because for one year she lived in a different city in Iowa.

And in that one moment, I suddenly remembered how glad I am for all the varied truths I have managed to gather in my short life. I felt glad to have studied abroad on the other side of the world, to have skydived and bungee jumped in New Zealand, and to have taught an Indian village how to dance the Macarena.

This is always how it is with me. I go back and forth. I feel a push and a pull. I want to be far but I want to be close. I want to have adventures but I want the familiar. I crave excitement and calm. I am jealous of people who stay until I remember that I’m not. I am made up of these two opposing desires, one of which has been allowed to develop only because I was pushed to leave home.

Doug and I were out to dinner with our friends Ben and Abby several months ago and a Lady Gaga song came on. “I did what any girl would do, and I would do it all over again,” Abby said, repeating one of the lines. “That’s what Ben’s paper is about,” she said, nudging her fiancée. “The concept of eternal return.”

“It’s feeling so content with the choices you have made that you would choose to repeat your life again, moment for moment, feeling every joy and every sorrow exactly the same, all over again.”

That’s me. I would do that. In a heartbeat.

I can never relate when people say things like “I would never want to go back to high school.” I feel nostalgic for every part of my life, and I would be happy for the chance to re-live any of it.

And maybe that’s precisely because I have gotten to have so many different and amazing experiences without staying anywhere long enough for things to get stale.

Missouri, Illinois, Indiana, and Iowa might not sound like places that would be exciting or that would be all that different from each other, but the people I’ve met in each place have been unique and wonderful. And that’s the only thing that really matters to me anywhere I go.

Letting go of day-to-day friendships with people I love is always the hardest for me. When I click with someone it feels like destiny, and like a mistake to part. I’m never comforted by “how easy it is to keep in touch these days.” When someone moves, things change. Period. That’s why moving is so painful.

I’m trying to train myself to not get so hung up on particular people, but to instead focus on the take-away lesson that all of this has taught me: There is no shortage of good people anywhere. The more you move around, the more of them you get to meet.

I try to remind myself to stop and just think about all of the experiences I wouldn’t have had and the people I wouldn’t have met if I hadn’t moved all these times and had all these adventures. And when I focus on that I stop, at least for the moment, feeling jealous of anyone or homesick for a place that doesn’t exist. Instead I just feel lucky. 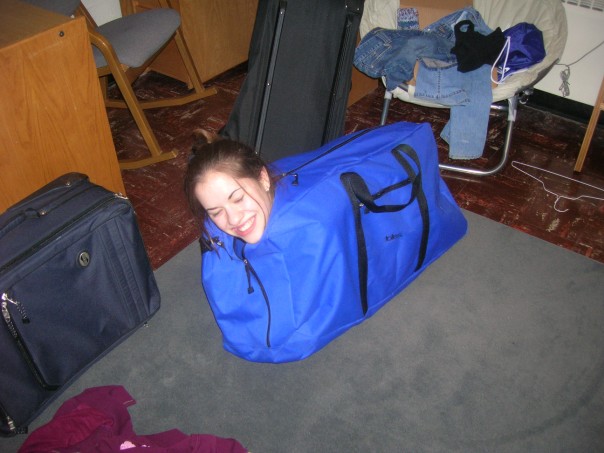