I look out my window at hundreds of tiny cars as my plane descends into Denver. There are so many people in the world. I get predictably overwhelmed by this thought whenever I am at a baseball stadium, a concert, or looking down at a city from the sky.

There are millions and billions of people, everywhere. I share personal histories with a few of them because we happened to be at the same place at the same time for one fleeting, overlapping moment in our lives. And yet somehow these histories with these people are unshakeable. Somehow they still matter, years later. They are still worth traveling great distances for.

Over the course of the weekend I will spend time with three different people from three different phases of my life: Anahitta from middle school, Scott from study abroad, and John from grad school. All three have, at one point, been my closest friend.

So it’s strange that anxiety and dread have outweighed my excitement leading up to this trip. I left work early yesterday with a crippling stomachache. I went to bed with a fever over one hundred. I had already made myself sick with my longing for what I feared might not still be there.

My curse has always been caring too much. I am nostalgic to a fault. I never get over anything. It has brought deep satisfaction to my relationships and rich color to my life, but it has also made me a selfish friend. My biggest fear is always that the people I love will move on into happy new lives without me. I haven’t always taken the natural ebbs and flows of relationships with grace.

I am so afraid of being the one who is left hanging on tighter. Of being rejected by those who once loved me. I don’t know where this fear comes from, but it is what caused me to hesitate in reaching out to these friends in the first place. It is why, with two of them, (the two who already live in Colorado), I suggested only that we meet for lunch.

Just for lunch. Because to ask for more than that would be to risk being a burden, or that they might say no. I understand, on some level, that this is illogical. These are people I used to do everything with. Scott and I traveled a continent together. John and I basically lived at each other’s apartments and at IHOP whenever we weren’t sleeping or in class.

But what if they no longer remember all those times and jokes and moments that transpired between us? What if they’ve moved on?

I am exhausted when Anahitta and I find each other at the airport. It is past midnight, but it is an amazing sixty degrees outside as we sit in our rental car trying to figure out how to start the damn thing. It’s a red Mini Cooper with white racing stripes. Not what we requested. The key isn’t really a key. How the hell do you start this piece of crap? It’s so late. We laugh until we can’t breathe. We always laugh until we can’t breathe. She is the only person who has ever been able to make me laugh like this. She moved away when we were sixteen. 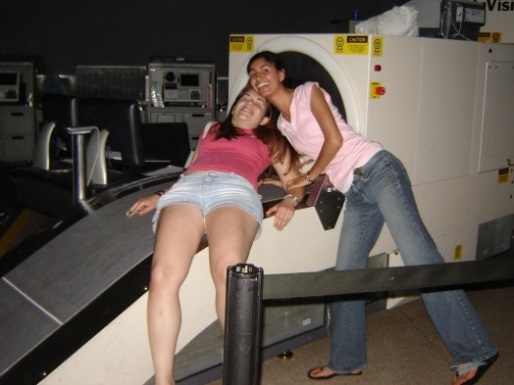 ^Anahitta and me in 2005, at the St. Louis airport the night a big storm caused all the power to go out. All the employees abandoned their posts. It was pure chaos. Of course we had to take advantage of this opportunity to photograph ourselves in all the normally-forbidden airport areas, such as the conveyer belt.

At the hotel, Anahitta and I reminisce about 7th grade and all those afternoons at Leah’s house spent waiting for Bye Bye Bye to come on TRL. We may have different ethnicities, skin colors, and religions, but we will both always know exactly what it was like to be thirteen in America in the year 2000. So we remember precisely how important Bye Bye Bye was. Is.

We pull up all the classic music videos on YouTube. Britney Spears, Destiny’s Child, O-Town. And we dance.

The next afternoon, Scott saves us from the ghetto in which I booked our hotel (oops) and shows us the real city. He is not buying this “meet for lunch” thing. He wants to see me, he wants to spend time, he insists. This makes me so happy.

Scott and I share a million memories about Australia over dinner the first night, memories of travel and friendship and adventures gone wrong that I suddenly realize I have been suppressing because they were so good. Because there was no tangible way to take them home with me without feeling alienated from everyone and everything in my other life. Things I was afraid to remember because I was afraid he’d forget and I didn’t want to be the only one left with the memory. But he remembers things I don’t even remember. Like how mad he got the day I hitchhiked down the mountain.

^Scott and me in my Australia dorm room in 2007. These are the types of things you routinely find yourself doing when you have a limited internet quota.

“I was so depressed when I came home from Australia,” I admit to Scott after the waitress sets down our bison burgers. Then I lean in and add, hopefully, “Did you get depressed too?”

“Of course I did,” he says, no hesitation. “I knew it would be a long time until we’d all get to be together again. We still haven’t been.”

He tells me that when he thinks about pure happiness and perfection, he thinks about Australia. He still keeps the photographs over his bed. I am so relieved he has felt the way I have, all this time. I make a mental note to put my photographs back up.

Later, Anahitta and I help Scott attempt a handstand on our hotel bed at the exact time of night his goofy side (his “little boy mode,” I used to call it) would always come out in Australia. I am amazed at how someone I knew for five months five years ago can still feel so familiar to me.

He spends most of the weekend with us.

On Sunday, Anahitta and I have lunch with John. John and I share so many good memories from grad school that I’m sure Anahitta must be bored out of her mind. But there are just so many. And they simply must be shared. My God we pulled a lot of pranks. 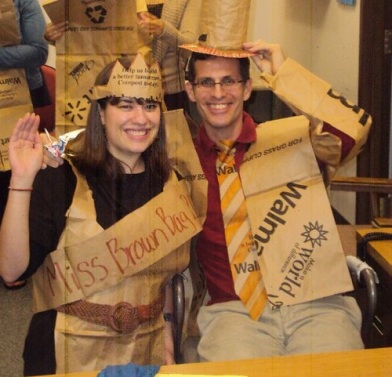 ^John and me the day we helped orchestrate the great Brown Bag Prank of 2010, in which our whole cohort showed up to our department’s “brown bag meeting” dressed in costumes made entirely out of brown bags.

John is also up for more than lunch. He takes us through downtown Boulder. We go into a bookstore and, within minutes, John and I are sequestered at the corner of a book display, our eyes lit up, speaking rapidly about every thought we’ve had since we last spoke.

I think maybe the biggest thing John has done for me is given me permission to give voice to all my deepest, weirdest thoughts. He understands exactly what I mean when I say things like I get a perverse satisfaction from spending time with people I don’t like, or that being a therapist makes me feel disgusted with myself, or that I had an existential crisis buying a couch. And I know what he means when he says he has built secret rooms in his metaphorical house or that he is profoundly affected by the wind. At times the rest of the bookstore seems to grow silent. I don’t think anyone in the room, or the world, could possibly follow the pace and range of topics and darkness and lightness and humor and metaphors of this conversation. But to us, it makes perfect sense.

On Monday morning Anahitta and I return the red Mini Cooper with white racing stripes. We still hate this car.

I ask Anahitta what her favorite part of the weekend was as we ride the shuttle to our gates. She does not mention riding the gondola into the mountains. She says her favorite was the night we had dinner at the mall and bought sweaters. Because it felt like something we could do any day.

I can’t follow that answer. It’s the perfect answer.

Alone at my gate, I feel like I have been hit by a tidal wave. I have re-lived three major parts of my life in the past three days. It’s a lot to sort out.

These three friends have allowed me to be three past selves: the silly pre-teen whose successful day is one in which she has laughed until she can’t breathe, the easily-excitable twenty-year-old getting her first real taste of adventure, and the grad student trying to balance her hunger for knowledge and wisdom with her propensity for naïveté and pranks.

I think of two things as I board my plane.

First, I think of what my supervisor told me on the last day of grad school when I said I was sad to leave my friends. “Whenever I get to see the friends I went to school with,” she said, “I know that they still know me better than anyone.”

The other thing I think about is the line that has gone through my head whenever I have had to say my final goodbye to someone before one of us moves away. I always think, I will never have a friend like that again. I thought that ten years ago with Anahitta, five years ago with Scott, and two years ago with John. And a lot of times in between.

And now I know for sure that it’s true. It was true every time. It’s always true.

You can read more about my attachment anxiety here and here.