The following is an excerpt I am working on for my new memoir. The true events I’ve written about occurred during my freshman year of college. Names have been changed.

I joined the community service fraternity Alpha Phi Omega (APO) with the vague notion that I would meet an acceptable boyfriend. One who was generous and altruistic. Enthusiastic and open-minded.

Because I had a history of being attracted to guys who were cynical and smart-alecky. Guys who had an edge. Guys who were sarcastic and cynical by default. Guys with a dark side. Guys who were too much like me. It never worked out.

There turned out to only be one attractive guy in APO: Drew. Drew was APO’s president. He was confident and friendly but also soft-spoken and modest. He wore polo shirts and khaki pants and studied accounting. Unfortunately, he was engaged to Emily—APO’s equally attractive vice president. They had one of those perfect relationships that every girl hopes to find when she goes to college until she actually gets to college and must accept the dire wasteland that is the reality of 99% of college dating.

They met the first week of their freshman year, got engaged their junior year, and were planning a wedding for right after they graduated. I don’t remember the story of how Drew proposed, but I’d bet my life that it involved a scavenger hunt. And I’m sure that Emily happened to be dressed to perfection when he popped the question, wearing a form-fitting sundress maybe, so that she looked amazing in pictures taken afterwards, never having to kick herself for not having washed her hair that day or for wearing sweatpants with “HOOSIER” written across the butt, like I worried might happen to me someday.

I was never more aware of my own romantic loneliness than I was when I watched those two at meetings.

Meanwhile, I couldn’t help but notice that APO sucked. For a community service organization, we spent very little time doing community service. When I signed up, I figured I’d just show up whenever I felt like doing some good in the world/flirting with hot, selfless guys. I hadn’t understood the exclusive and ritualistic nature of Greek organizations. I hadn’t even understood that this was one.

At the beginning of each meeting, our appointed Sergeant-at-Arms would spend half an hour at the board writing the names of approximately ten thousand members who had stopped attending these meetings. Then she’d go through them one-by-one and have us vote on whether to terminate each membership. (“All in favor… all opposed…”). It was always unanimous. Nobody ever voted to keep anybody.

This process made me especially squeamish, as I had the premonition from day-one that my name would be on that board in the not-too-distant future. I could see it clearly. Nobody would remember who I was, but every hand would raise to erase me forever.

But that wasn’t as bad as the singing.

At the end of each meeting, we all had to join hands and sing the official APO song. Then we had to cross our right arms over our left, hold hands that way, and sing it a second time—this time swaying. I swear, nobody else found this creepy.

The only service activity I signed up for was “Feline Rescue.”

“That’s a great one,” some preppy bitch lied to me. “I hear you get to play with cats.”

I rode out to the middle of Nowheresville, Indiana that Saturday with three other girls from my pledge class and was shocked to find what must be the country’s largest and most randomly located large cat refuge. Lions, tigers, and bobcats surrounded us in shoddily-constructed cages. I could have reached out and touched any one of them.

We were greeted by a woman who was standing over a stack of dead cows and holding a butcher knife in her blood-covered hands. “You’re just in time!” she howled. “I’m about to start cuttin’ up the calves!” She brought over releases for us to sign.

The details of what ended up happening that day are between me and my pledge sisters, whatever their names were.  All you need to know is that we spent the day cleaning out litter boxes. Tiger litter boxes, mind you, which are as big as houses. We were knee-deep in feces, blood, and cow carcasses as the tigers paced mere feet from us and an angry man named Joe circled us in his golf cart yelling, “Hurry up! The tigers are gittin’ hungry!”

On the day that I was supposed to attend my official APO induction ceremony and finally get to learn the secret handshake, I got on a plane and flew to Washington, D.C. to spend the weekend with my two best friends from high school. We spent the weekend positioning our bodies in absurd poses, knocking each other down, and laughing. It brought back an old, familiar feeling I had nearly forgotten existed—comfort. Unconditional acceptance. People who got me. Not having to try. 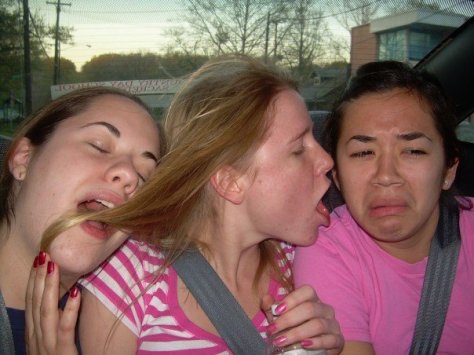 I went to a make-up APO induction a couple weeks later (first time I was allowed to enter the official APO office). Drew conducted the stiff ceremony, in which I was asked to swear to give up all hate, prejudice, pride, greed, and envy for the sake of the APO brotherhood. I thought this was asking a bit much. I was tempted to ask if I could keep my greed—just the greed. But I didn’t. I agreed to everything, learned the secret handshake, and never went back.

What was the point? I understood by now that my Drew was not in APO, and that I was not going to find him by digging in tiger shit.

My Drew was not a Drew at all, I was pretty sure now. Thank God.

27 thoughts on “Looking for Love in a Litter Box: My Brief (but much too long) Stint in a Fraternity”