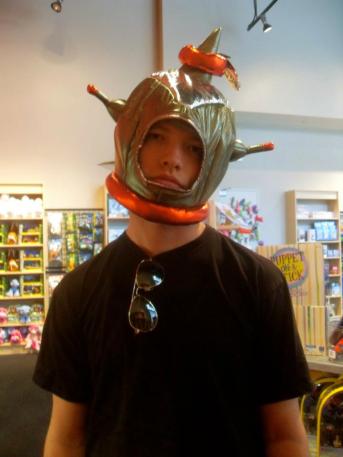 Me (After Reading a Meme): Did you know that JK Rowling lost her billionare status because she donated so much money to charity?

Doug: Oh, big deal. So she took the thing she has the most of– money– and gave away some fraction of it. If she wants to make a true sacrifice, she should take something she doesn’t have a surplus of and give that. Let’s see her sacrifice one of her parents at the top of a pyramid, like the Aztecs.

Me: Why do things have to be so complicated?

Doug: If you want the answer to that question, you’re going to have to get in line behind Avril Lavigne. She’s been asking that one for about as long as this earth has rolled around the sun.

Doug: Yesterday I was driving and saw not one, but two dead raccoons by the side of the road. I think they must have been lovers. One probably got killed first. When the other realized what happened, it must have been so grief-stricken that it allowed itself to get run over by a slow-moving tractor.

Doug: We’ve got flies in the back room. If you see any spiders, don’t kill them; we’re going to need their help on this one. For long enough, our two kinds have lived in animosity. It took the arrival of a new foe, bigger than either one of us, to bring us together, united in a ‘web’–if you will–of camaraderie.

Me: Later in life, are you going to want to go back and sow your wild oats?

Doug: Later in life, the only thing I’ll want is some honey toasted oats in a bowl every morning.

8 thoughts on “Quotes from my Boyfriend”