Noemi and I recently returned from our second annual Caribbean getaway, this time to St. Martin.

We spent the first few days driving up ninety degree angles, soaking up the sights of the nude beaches, and dousing ourselves in acid to avoid the Zika.

By our second to last day, we were feeling kind of worn out from said activities and declared a “vacation from vacation,” in which we spent the day playing poolside bingo with a bunch of old people with timeshares (Noemi won a bottle of champagne!).

By our last day we were out of things to do, so we boarded a ferry to the island of Anguilla, which we had only barely heard of. Luckily, there’s a woman there whose job it is to greet confused, American tourists when they step off the ferry, having only barely heard about her country.

Since we only had a few hours, she suggested we go to the nearest beach—Rendezvous Bay.

“Who told you about Rendezvous Bay?” our cab driver asked when we told him our destination.

“A woman we met two minutes ago,” I said.

“You crazy,” he said, shaking his head. “Rendezvous Bay no good. No good at all. Good beaches are on other side of island. You crazy.”

As he continued to emphasize our insanity throughout the ride, 50% of me suspected that he was just trying to trick us into spending more money while the other 50% of me was having a silent panic attack and biting my lip to refrain from shouting, “TAKE US TO THE BEST AND FARTHEST BEACH—I’LL PAY ANYTHING!”

But Rendezvous turned out to be absolutely the right choice. We stumbled out of his cab to find ourselves standing on sand as soft and pure as clouds, looking out into the cleanest, most turquoise water imaginable. Weirdly, there was no one else there.

We walked along the shore in a delirious haze, barely able to comprehend our own good fortune.

Eventually we came upon a row of beach chairs, which had clearly fallen out of the heavens just for us. They were all empty save for a few elderly people. We sat on two of them. 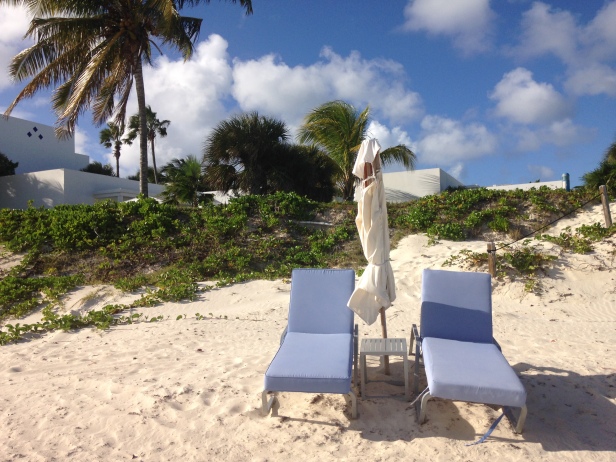 We were soon approached by a man in a white uniform. “Are you staying at this resort?” he asked.

“No, but we’ll pay to rent the chairs,” I said with a proud smile.

During our time in St. Martin, we’d learned that it was impossible to sit on the beach anywhere without paying $10 per chair to the nearest resort. At first I’d found this stressful and annoying and had tried unsuccessfully to avoid eye contact with chair-rental-fee collectors. But now I was at the point of the vacation where money had lost all meaning to me, to the point where I had nicknamed twenty dollar bills “twen-os” and liked to gleefully announce that I was “handing out twen-os like candy!” whenever I paid for anything, all the while laughing maniacally.

That’s why I was smiling proudly. Because if this guy thought a mere twen-o would scare away the likes of us, he had another thing coming! I WAS THE QUEEN OF TWEN-OS.

“You pay at front desk,” he said, pointing to a spot in the distance where I could barely make out a row of white buildings.

“I got this,” I said to Noemi, grabbing my wallet as the man opened our umbrella and presented us with a stack of chilled towels and a bottle of sparkling water. I left her to luxuriate as I headed off down the beach.

Before I knew it, I found myself walking along an intricate and seemingly infinite labyrinth of pools. Then I was climbing a long, round staircase that was also a waterfall. I started to wonder if it was really the resort I was approaching, or if I had died of heat stroke and was actually walking toward the gates of heaven. (I quickly decided that, if I came back to life, I would definitely write one of those bestselling books about what it’s like to be dead for ten minutes.)

I never did find the front desk. I got lost between two buildings labeled “Venus Spa” and “Hydroponic Farm.”

“May I help you?” asked a woman(/angel?) in a clean, white uniform.

“I’d like to rent two beach chairs,” I said, running my finger along the crisp twen-o in my pocket.

“Okay,” she said. “That will be one hundred and twenty dollars.”

“You want to think about it?” she asked, reading the panic on my face. I nodded and backed away slowly. Then I turned and scrambled off the property, but not before stealing their Wifi to check Facebook and snapping a couple pics of their massive pool system.

(I would later learn that an episode of The Bachelor was filmed here, which confirms it’s the best of the best.)

I took my walk of shame back down the beach, past the row of chairs that were still empty except for a few old people. Now I understood why they were so old; you need several decades to amass the small fortune required to comfortably sit on this island. That or be on The Bachelor.

“Abort,” I said to Noemi, who sat reclined and shaded like a queen. “Drop the towels, drop the sparkling water. As far as this resort is concerned, we’re human garbage.”

We dejectedly gathered our belongings, stood, and squinted out into the water. And in that water, we noticed something: a floating trampoline. Courtesy of the resort. Empty, of course.

We looked at each other, silently having the same revelation: nobody would bother swimming out into the ocean just to kick us off a floating trampoline.

Money can buy a lot of things.

It can buy beach chairs, umbrellas, and sparkling water. It can buy a trip to an island resort with waterfalls for staircases. It can buy a Hydroponic farm.

But there’s one thing money will never, ever be able to buy:

Young, 29-year-old bodies that are still (just barely) firm enough to hoist themselves up onto a giant trampoline anchored to the bottom of the ocean. 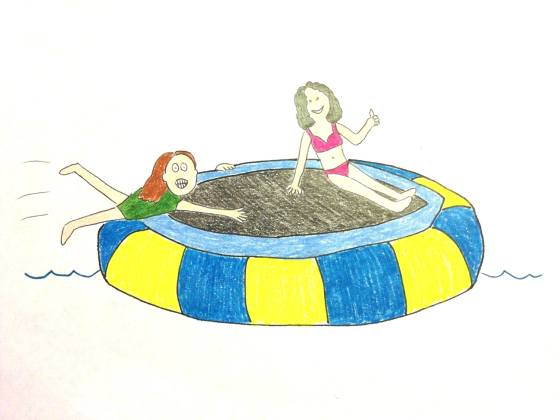 That, my friends, does not cost a single twen-o.