Doug is always listening to old country songs ever since he became a cowboy. Everytime I pass by his computer, someone is singing “Baby, let’s sell your diamond ring—buy some boots and faded jeans and go away,” or “I’m going back to Texas, back to the only love I’ve ever known.” Somedays I wonder if he is dropping hints, and if one day I will wake up to find him gone. His suitcase and his belt buckles missing. A note taped to the fridge that says only, “Gone west.”

But on Friday night he played a song that stopped me in my tracks. A song about emerging from a hard time and finding that everything is suddenly going your way. You step into a bar and all your friends are there. And your favorite band is playing your favorite song. You only wish you had some money, until you reach into your pocket and find three twenties and a ten. It would only be better if that one person was there, but then you look across the room and there they are, smiling back at you. Feels so Good, Feelin’ Good Again. It’s a song about rebirth.

The whole song just felt so real. The lyrics were so simple and true. So familiar, that simple goodness of feeling good again. Of reconnecting with friends who have been too long gone. Of stepping out of the bad relationship and into the good one. Of the snow melting and spring blooming and energy and sunlight returning to your life.

It instantly became my favorite song.

I made Doug learn it on guitar and play it two times in the bathroom each time I showered. I showered three times.

Also, the chords in this song even sound like how it feels to feel good again. I explained this to Doug on Saturday night as we ate in a noisy sports bar and then officially declared James Earl Jones my all-time favorite singer/songwriter.

“It’s Robert Earl Keen,” Doug said, “And I’ve always actually thought the song was about someone who dies and enters the afterlife. That’s why everything is so perfect. His friends are all there waiting for him. His band is playing his favorite song. He wishes for money and it appears. He misses someone and she shows up. It’s dream logic.”

Dream logic. Those words sliced my heart like a blade.

I listened to the song again as soon as we got home. And it was obvious. Of course. Death. Losing a long, painful battle with cancer and feeling the relief of your body and sadness slipping away.

Because, I mean, I don’t know. I just didn’t want this particular song to have to be about loss. I wanted to believe that everything suddenly going your way for no reason at all was a real thing and a common enough phenomenon that someone would write a song about it. I wanted it to be about the way I feel every spring.

And maybe it was. I shot out of bed the next morning and decided to do some research.

The first thing that popped up on Google as I started typing Robert Earl Keen was the schedule for my local theater. Informing me that he would be playing there that night. Eight seats left.

I’d spent all weekend contemplating the art of everything randomly coming together in your favor. Dream logic, if you will. And wasn’t this it? This basically was a lyric from Feelin’ Good Again. Discovering your favorite song, and then discovering that it is about to be performed live half a mile from your apartment. Eight seats left!

Doug and I were in two of those seats seven hours later when the band came out playing my song as their opening act. 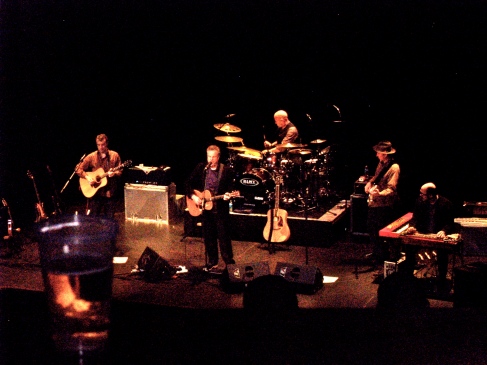 And we were the last ones to leave, because I had to wait for the band to come out so that I could ask Keen myself what his song was about. Until an usher finally informed us that he would not be coming out.

I was disappointed but tried telling myself it was for the best as we walked back to our car. It would have been awkward, afterall, to tell him I had heard about him forty hours ago and was now his biggest fan. Plus I still kinda thought his name was James Earl Jones.

And also, I wasn’t that disappointed. Because I was actually elated. I would be on a high for the rest of the night.

Because it didn’t matter what the song meant. I knew that I already knew the answer to my question:

It’s the universe’s way of taking care of us. Of sending us what we need and returning what we’ve lost. Friends and love and good days and nice weather.

And sometimes even a well-timed concert.

Just as a personal bonus.